Fitting Your Buicks Wheels and Tires!

Backspacing -- The distance from the mounting surface of the wheel to the extreme back side of the rim.

Wheel Width -- The width of the wheel bead seats. Not overall wheel width! Most 6" rims have an overall width of 7"s 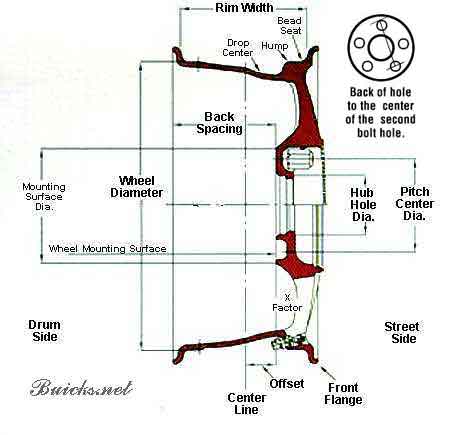 Here is an explanation of tire fitments and what all the numbers mean, and how they correlate with the old sizes.

Now, if you want to go to a wider tire, but you don't want to change the overall diameter/height of the tire the rule of thumb is this:

Take our first example 225/70R15 To go wider you would do this. 235/65R15 wider yet would be: 245/60R15 and one more would be 255/55R15 You see the connection here. When doing what is called a "plus fitment", you increase the width number by 10 and decrease the Aspect Ratio number by 5. That is if you keep the same rim diameter. There are different rules for changing rim size that I won't get into here.

On tires that came out on these early 60's cars Ex. 7.50/15, the cross section was represented in inches. It was still measured at the fattest part of the tire/sidewall. The tread on that tire was about 5 inches wide. The reason there was no Aspect Ratio number listed is because the sidewalls were always a 1 to 1 ratio. There were no percentages. The sidewall was the same as the width. Then in the late 60' and early 70's they changed to letter designations and used an aspect ratio for the first time. Ex. G-78/15. Remember those? G stood for the width which in this case was about 215mm. Then the 78 was the Aspect Ratio. and you know what the 15 meant. From what I understand the old designations roughly translated like this. F=205,G=215,H=225,L=235. That was if the 78 aspect ratio was used. So a G-78/15 was about the same as a 215/75R15. Those changed if you went to a 60 series or 70 series. The old 78 series matches closely with the 75 of today.

Is everyone totally confused yet? I hope not, I hope that explains tires a little.

This tire chart is for the BF Goodrich Radial T/A

* * * * *
Wondering how far out your speedo will be after the tire size change?


Your new tires didn't quite clear your fenders...:(

Wheels and tires can be one of the first changes many enthusiasts make to their "toy". It is always a difficult decision. Here is what I did and why. It may help some of you with your choices.

The look I wanted was one that appeared stock, but somehow good. You know how some cars just sit a little nicer than they should. 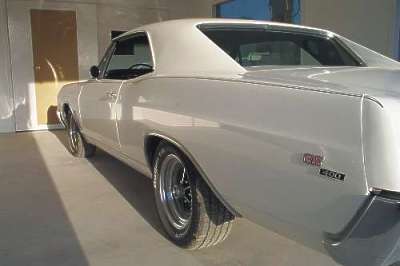 I decided to I wanted to keep the stock wheel appearance, but in 1967 they sat the car on 14x6 wheels with a 3 inch backspacing. It kept them tucked nicely out of the way and surely kept the side of the car cleaner in the rainy weather and on the gravel/dirt roads.

I didn't feel these reasons carried enough importance for what my car was going to be used for,which was definitely not a daily driver. It was only coming out when the weather was expected to be good, and would probably never see dirt and gravel roads.

Buick made the series 57 in a 15x7, but with a 3 1/2" backspacing. If you can find a good set of these, they should fit nicely without any fender mods.

in a P235/60R15. This gave me very close to an original overall diameter (no messing with speedometer errors). This was going to move the tires 1 1/2" closer to the fenders.

After mounting, there was enough clearance to take it for a test drive and see if it was enough. As with most cars there was about a 1/8 difference from one side to the other. When I hit the right bump, I could get the odd scuffing noise. Oh well, back to the shop for some fitting. 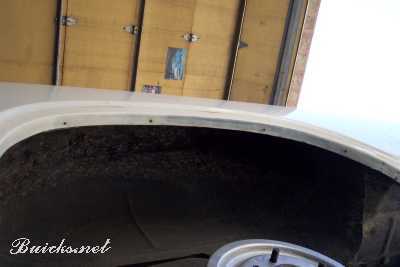 In the fender area that required modification, you have the inner and outer fenders overlapping and the stainless covering. I removed the stainless.

I figured about a 1/4" more clearance would be enough. There was two ways to accomplish this. One way is to simply cut or grind away the offending material. It leaves an edge which can still scrap and cut tires should they ever come in contact.

I chose to use a hammer and dolly and roll the lip up. This gave a nice OEM look and a rounded edge that would be much less likely to ever damage a tire even if it came in contact. 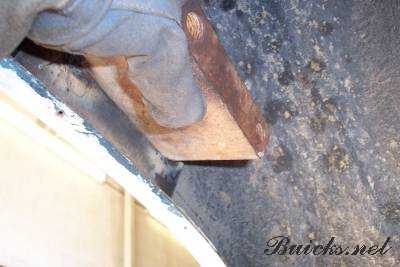 Of course they don't make a dolly for this purpose, so I just grabbed a width of flat steel that I thought would give me adequate clearance when the job was done. I used a 5/8". I welded a chunk of scrap to it for a handle and to increase the weight. You'd have a tough time rolling this double lip with a body hammer, I use a modest sized ball peen hammer. Once the lip was rolled to about 45 degrees, stopped using the dolly and continued to tap it till it was vertical. When tapping just use lots of light taps moving along the surface so as to gently roll the lip. 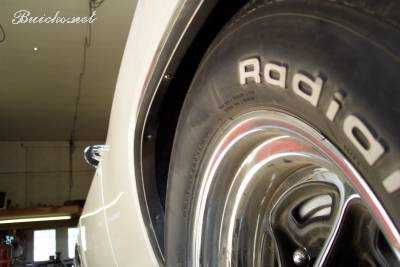 I then screwed the trim back on and tapped it to show exactly where to continue it roll. I clamped a piece of 1/2" plate in a vise and finished rolling it up, then remounted it and re drilled the two holes which had been moved around the edge.

Now that picture shows how well the fenders are filled! 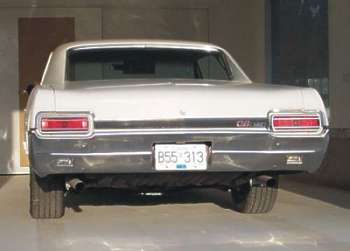