When the car belonged to my grandparents, we would take it out on a nice day, with the top down, and all the windows down, and drive it around. I did notice smoke coming through the dash, especially if you hit it hard, but with the car completely open it never really bothered me.

But now it's mine and I drive it more often, including days when you wouldn't want the top down and the windows don't work well at all (new topic for another day). The smoke coming in is very noticeable, especially when driving to work in the morning, with the sun low in the sky. I sometimes feel light headed after a drive, which can't be great.

It's coming out of the oil filler. I'm sure it's blowby gases venting out. I haven't done a compression test yet but I suspect the rings aren't great. I don't have money for a rebuild right now, so even if it is rings, not much I can do right now.

It's actually a 1962 401 in a 1966 Wildcat but the passenger valve cover with the PCV has been switched over and I just put a new valve in. When it idles in neutral, it's pretty smoke free but idling in gear produces a fair amount of smoke and I'm sure it's even worse while driving.

So I guess my two areas of concern and hopefully action would be: how to reduce the smoke and how to keep it out of the interior.

I've done some searching on forums and I'm not the only one this has happened to. Solutions seem to be thicker oil, high miles car oil and Bardahl No Smoke. What else can I do? I don't want to just put a tight fitting oil filler cap on, as it's probably just going to pressurize the crankcase, since it has to go somewhere. But what if I took a oil filler cap, drill the hole into it and ran a breather hose away from the engine, running the gases down towards the road?

What is the most likely route it's taking into the car? Would it be through a weak point in the firewall, under the hood and into the intake cowl at the base of the windshield (not an ideal design when the engine gives off smoke) or a combination of both? Other than plugging up any hole in the firewall, is there any other way to address this? And yes, the hood to cowl rubber is in place.

I'll do a compression test when I have time. Hot or cold? All plugs out, choke and throttle blocked open (including secondaries?) and crank it over with the tester in one cylinder. Anything else?

Any other ideas on how to deal with this issue?

That smoke is called blow-by and your right the only real fix is rebuild the engine. Before PCV valves the engines had road draft tubes and those directed the blow-by under the car. I do not know if there are any chemicals that might help you out temporarily but I am sure other people on here will have some good ideas.
D

You could temporarily use something like this where your breather is with a hose between it and a nipple of the same size leading inside the air cleaner. It would be similar to the closed crankcase system used in CA. I don't know how long it would be until it gummed up the carb. That would depend on the level of smoke it passed. Crankcase vacuum systems would cost more then rebuilding the engine in some cases and you don't have headers for an evacuation system.

Is your PCV sucking air when you pull it out of the valve cover?
3

As noted be sure the PCV system is working, then change the oil and filter and take it for a 100 mile run at highway speeds. This will cook all of the volatiles from the slow driving and maybe loosen up the rings.

The '66 should have a "closed" pcv system. I suspect you do not have the correct valve cover breather. which should be connected to the air cleaner by a hose.

You can see the correct system in the '66 chassis manual CLICK HERE, and scroll down to page 60-122 for a description and page 60-124 for a picture.

Regardless, the blow by you are complaining about indicates a problem.
J

Thanks for the replies.

The PCV is definitely sucking air if I pull it off the valve cover while idling. There is also an increase in blow by coming from the breather if I pinch off to tube with a clamp, so I'm sure it's drawing air.

Bob: is this the picture you're talking about? It shows the PCV on one side and air filter housing connector on the other. As you can see from my photos, I've got the right one on the PCV side but not on the other. Because they did the PCV side, I always thought the whole thing was done right, but I guess I was wrong. Why bother doing one but not the other?

Dr Frankenbuick: thank you for that photo of the Chevy oil filler with the hose connector, that's exactly what I had in mind. Long term it would be best to source the correct valve cover and air cleaner but in the short term I could just route the hose into the air cleaner. Not the most elegant solution, but this isn't a show car. That seems to be as close as possible to simulating the function of the original closed system, until I can get my hands on more correct parts. Do you think there is great danger of it gumming up the carburetor? I know it's going to be more smoke than the system was originally meant to handle, but it is all getting filtered. 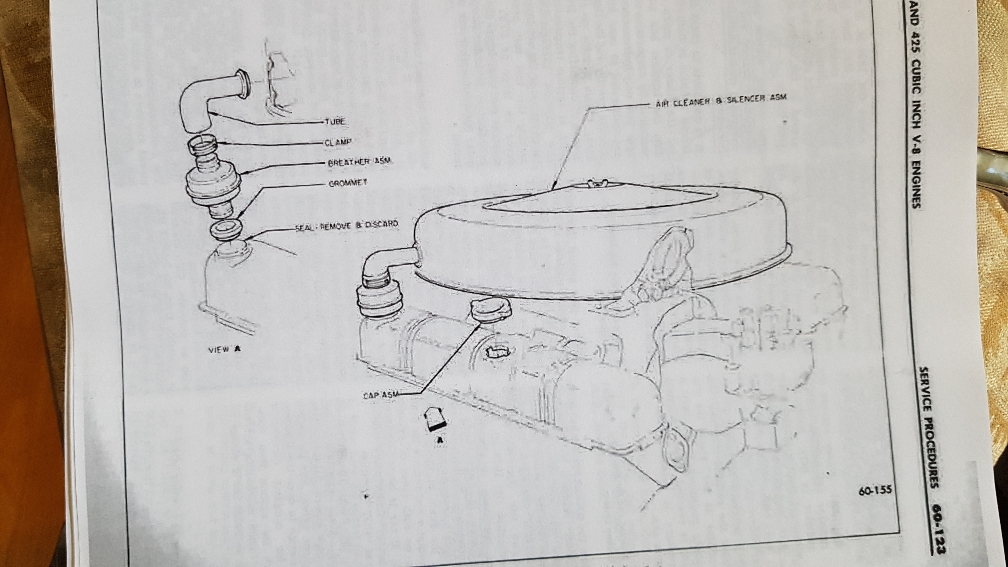 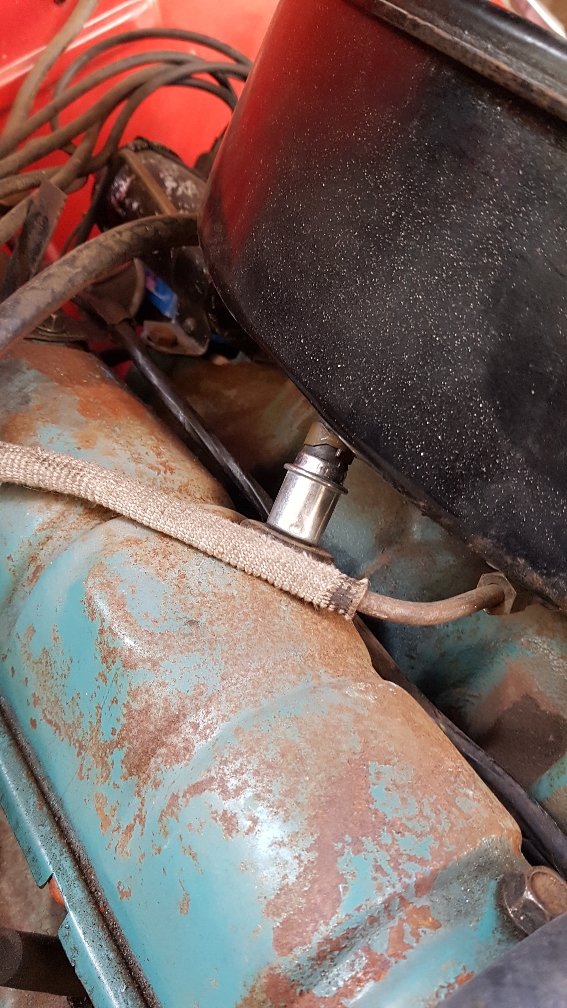 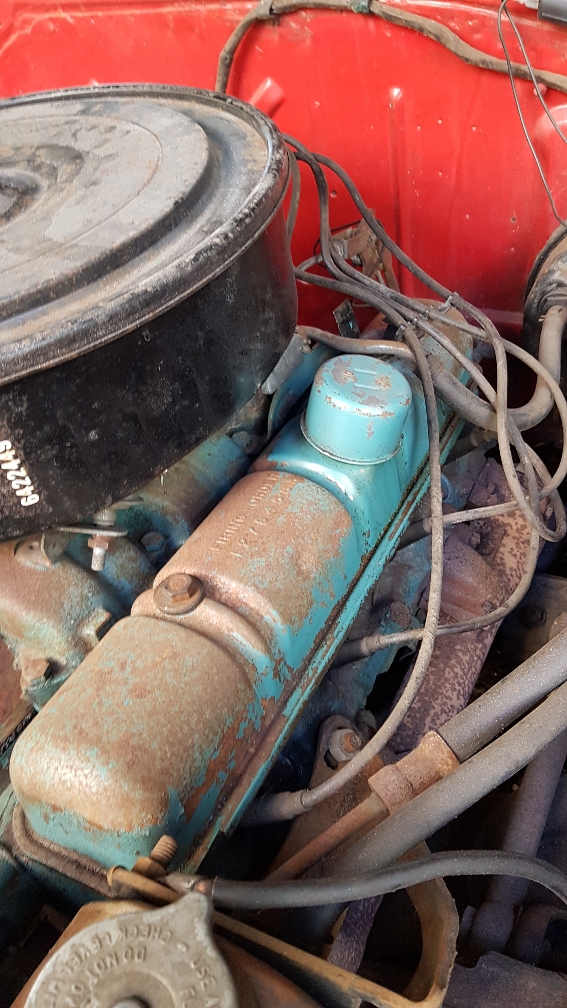 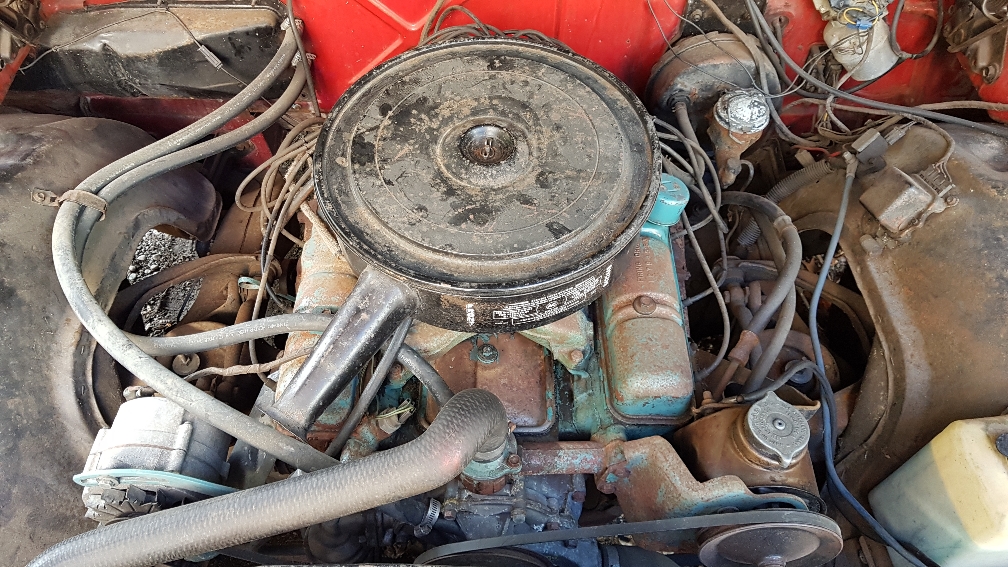 Jeremy, your current system, plus the baffle you don't have under the PCV, is exactly what was used on every Nailhead in every state from 1963-1965. It was right for all of those cars in all of those years. So, it made sense that they left the closed system off when changing the engine. Very little was pulled into the closed system air cleaner from an engine without blow-by. It was only due to tougher emission standards that the closed system was required in CA in 1966.

The closed system designed to pull a small amount of blow-by and oil spray from a properly functioning engine is asked to handle a choking amount (at least from inside your car) of burnt gases, pressure leaking past the rings and oil spray from your engine. This is going to clog an air filter with a lot of nasty stuff quickly. I don't know how quickly, but way faster then normal. The larger amount of burnt fuel gasses being added back to the carb will make it run richer and adding oil to the fuel charge reduces the octane of the charge. Plugs may foul quicker and it may be more detonation prone as a result. You could always back off the ignition timing if it detonates.

IMO all this adds up to using the closed system as a possible temporary measure to get you through until your blow-by can be addressed. It's just not going to work long term. I would try to find a spot on the filter base to come through for the system. That way you can put a plastic plug in it later when the car is repaired and no one will ever see it under there.
J

I'm not too worried about clogging air filters, as I'm a very low miles driver (I think I drove 2200 miles last year) but that's a very good point about the unclean air possibly affecting the way it runs.

Would that Chevrolet oil filler you linked to fit the Nailhead or did you send it as an example of what sort of thing I should be looking for?

I just happened to be at Canadian Tire yesterday but the kid in the parts desk couldn't help me without a specific part number or the specific car that it came off of. I'll try Lordco tomorrow and hopefully they are more resourceful.

Yes, that one fit the Nailhead breather hole, but I see they are out of stock. Here is another that is cheaper. It is part number 4806 and it is made to fit a 1.22" twist in breather hole. That is the generic size for most GM twist in breathers including yours. You could try Trans-Dapt Performance part 4806 at the parts store, but be prepared to pay 3-4 times as much as the one listed.

You're going to have to figure out the other end of the tube for the air cleaner at the hardware store. You need a tube of the same size with a flange at the end and capture nut that fits threads on the tube underneath the air cleaner. I have seen similar parts in plastic. I just don't remember where. It may have been the plumbing section?
You must log in or register to reply here.
Share:
Facebook Twitter Reddit Pinterest Tumblr WhatsApp Email Share Link
Top