Also did a (very) preliminary mock-up of the carbs. They'll actually mount about 5" lower in finish position, but the manifold (to be) length looks pretty close.
​

Couple weeks worth of set-backs. Had to take this week to get our Rose Parade float chassis ready for its first inspection of the year this Saturday. Called a Mechanical Inspection, or MI, by Tournament, it's one of three required to participate in their parade each year.

​Well, got a couple more days to fiddle about in the garage. So ........ cobbled up the spoon gas pedal, and did the initial carbs mount. Used a head flange set I found through the site here, some EMT I had laying about, and a bit of plate for the carb flanges. All in all a nice couple days. Hope to get in a couple more in the next few weeks as well.

firstofeight said:
Thank you ,sir. Did not know that. I am not sure I understand semi precision and full precision.

Am I correct on the rod bearing change? I sure do not want to mislead anyone.

Ben,
Yes, factory info indicates 1949 engines used inserts in the connecting rod bearings except for about 5000 built at the start of the model year.

Precision was the factory's preferred term for insert bearings vs. cast-type for Babbitted bearings. I take it precision refers to non-adjustable bearing construction. The Babbitt bearings were installed with shims which could be gradually removed to adjust bearing clearance and compensate for wear.

The meaning of semi-precision is still not clear. It may be explained in the '47 Shop Manual supplement as it pertains to the interim late '46-early '47 part numbers. I'll try to pick up a copy to learn the answer.

Managed a bit of playtime today, so added the balance tubes to the intake.
Also started swapping parts from the 6 garbage SUs (I got in a parts swap awhile back) to paste together 4 that'll work. Number stamped the intake runners & carb bases so's I can keep'em in order in the future as well (beats juggling'em :laugh_3.

Got in a few more play days, so did a bit more on the throttle linkage. Also got the rear brakes & parking brake functional (fronts need new drums yet), fuel system complete from tank through pump, and roll bar added.

Then rolled'er up to the HAMBster's trailer so I could bring the HAMBster down to go through the bottom end. Musical Cars is pretty much the name of the game when you hobby out of a 1918 one car garage. :laugh_1:

Well, Kiddies, all the hoopla from this year's Rose Parade was finally over by the end of February, but I had to take most of March to make some drive train changes to our float chassis. But ....... at last I'm back to the garage.

Got the "common" shaft cobbled up on the throttle linkage, it's now functional to there. Went through the four SUs, and ordered the parts & pieces I'll need to get'em functional. And dug out the Willys Knight dash switch set-up I built for'er back when.

Also butchered a couple of second gen slant six rocker boxes to make a cosmetic "cap" for the Buick one. Just one of my oddball notions, may actually use it if it turns out decent enough.

Next up're the levers & drag links for the throttle. Burlen wants more than I can justify for their repros, so it'll have to be another cobble.

he's back! the gangs all here!

do you think you're going to make the Lake this year?

Up in the air on that. I agreed to another year with both Cal Poly's and Sierra Madre's Rose float programs. With those and the drag racing, it tends to rather well saturate a years worth of weekends.

But, I'm putting the 'Brick up for sale this year. I've been racing'er for a decade now, and really want to get back to the street with Cassi. Once she's gone, and I'm back on the street that'll open up time for other meets and even some local runs & shows. So, pending that sale ........

Nice to see the site back, was having withdrawal symptoms.

Finished up the carb linkages during the outage. Pulled the mock-up pb904 out & sold it. Will have the intended pb904 out to the shop I use for slush pumps this year sometime. Plan to get a pic or two of the bell adapter up before it goes back in.

Buick speedsters are some of my faves! This one is local, but lacking the slant 8 approach... just to possibly ad some ideas for you! The owner built 100% of this at home! Bill in Two Rivers, Wi...

Well, some effing virus hauled off and messed up my plans for awhile. However, in the process of clearing out my old ceramics shop area (where Cassi's parts were stashed) I had no place else to move'em, so had to paste'er back together for now. In lieu of actual progress (stymied for now) here're a couple thumbnails of the girl with her body works back on.

Well, it's been awhile. Fairly busy with Rose Parade float work at the moment, but managed to tinker on Cassi a bit at least. Added a radiator shell brace and a fuel rail. Fuel delivery system now complete. Thinking about cobbling up choke linkages next, then on to the exhaust pipes. Still to go this year're the pb904 rebuild, the oil pan & pick-up mods, and a cooling system. Hope to flame'er up before the end of the year. 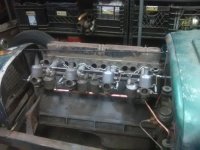 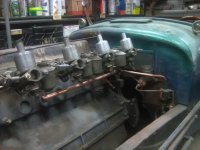 Just stumbled on this build and found it fascinating. You have a nice car and cool ideas. I wish you well in getting it roadworthy soon. I have many of the parts to do the same, kind of, but I have a T bucket with a nailhead so I don't want to build another roadster. plus, I'm older than dirt and need to stay out of the wind. If I stumble upon a closed body, I might start a project. Thanks for some inspiration. Keep us in the loop.
You must log in or register to reply here.
Share:
Facebook Twitter Reddit Pinterest Tumblr WhatsApp Email Share Link
Top